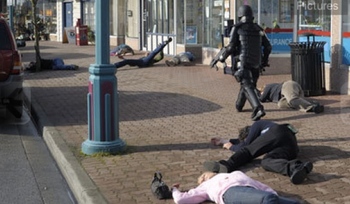 "The purest surrealist act is walking into a crowd with a loaded gun and firing into it randomly."
—Andre Breton

A Spree Killer is defined as someone who commits two or more killings in at least two different locations with no significant time period or return to normalcy between the murders. This lack of a "cooling off" period is what differentiates a Spree Killer from other murderous archetypes; all of their murders are part of one single rampage.

Thus any breaks between the killings often amount to hours, occasionally days and rarely weeks (such as if time is required to plan a big attack) but to qualify, at no point do they return to normal during their spree only after it is over (assuming that they have an end point and aren't going to simply carry on until they are stopped).

Spree Killers are commonly depicted as using guns and going on shooting sprees, as firearms are the easiest way to kill multiple people in a short time frame and lack the personal touch of other weapons. However, this is not a rule and it is not uncommon to see Spree Killers using a variety of different methods to kill, potentially whatever they have to hand at the time.

Reasons for someone becoming a Spree Killer wildly range from insanity, to revenge, to simply snapping and lashing out at the world. It is very common in the media for Spree Killers to be portrayed as homicidal maniacs driven (at least in part) by the sheer enjoyment of killing people. But this does not have to be the case to qualify for this trope. It is entirely plausible for a Spree Killer to appear completely rational or even indifferent towards the deaths they cause.

For particularly sociopathic and unsympathetic depictions the killer may present it as a challenge, with them seeing just how many people they can kill before being stopped, in which case expect a Kill Tally to be involved.

Often their killing spree will initially appear to be completely random, but as events unfold a clear pattern will emerge as more is discovered about the individual. But it is equally likely (especially in cases were the killer is clearly out of their mind) for it to be truly random. Sometimes this amounts to them just killing the nearest person to hand.

Whilst most killing sprees are in at least some part premeditated, this is not a necessity. Its entirely possible (particularly in more sympathetic depictions) for the killer to have never even intended to go on a rampage and events simply spired out of their control.

It is also quite common both in real life and in fiction for the Spree Killer to end their rampage with one massive attack where they try to take out as many people as they can and will carry on until they either killed or captured.

Candidates who kill people over large areas that are technically considered one location (such as in the case of the School Shooter archetype), can still qualify for this trope as long as their spree takes place over more than one building or a significant time frame i.e. over more than one day. Not to be confused with Spree, although the protagonist is a Spree Killer.

Compare Going Postal, which is about the circumstances that lead up to a killing spree. Contrast Serial Killer, the more popular archetype for committing multiple murders, who unlike Spree Killers have a clear cooling off period between kills (although it is possible for one to transition into the other). Terrorist Without A Cause, who can use similar tactics but goal is random chaos and destruction over an killing spree, Serial Killings, Specific Target where the killing spree is used for covering up a specific target (although they can still count as spree killers). May overlap with Outlaw Couple, if killing people is part of their crime spree.

Note: As a rule, when the killer in a Slasher Movie isn't a Serial Killer then they will be a Spree Killer (and of the two, Spree Killers are more common to the point the genre is often described as about maniacs on a killing rampage) making the genre a subtrope of this one. Thus whilst most Slashers count there is no point including them as examples unless they are specifically described as a Spree Killer In-Universe.