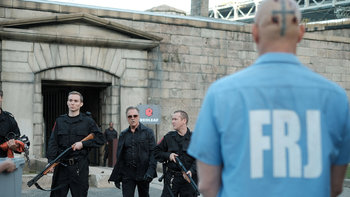 "The Red Leaf Detention Center is classified as a maximum security facility. But there's another term I prefer. One that I think will give you a clear picture. Minimum freedom."
Advertisement:

Bradley Thomas (Vince Vaughn) is a reformed criminal trying to provide an honest living for his wife, Lauren, in the wake of a miscarriage that has strained their relationship. After getting laid off from his job, Bradley returns to drug running, and the couple revive their marriage with a new pregnancy. Things are looking up until a job gone wrong sends him to the slammer, where a vengeful crime lord blackmails him to murder an inmate or see his wife and unborn daughter slaughtered. Now Bradley has to fight his way through the prison system to save his family, at whatever cost.