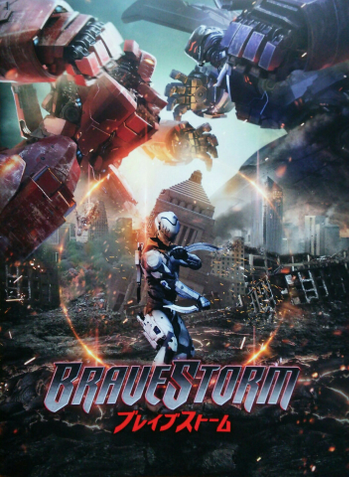 The year is 2050. The Earth has been taken over by the aliens called Killgis and ninety-six percent of the human population perished. In a desperate bid to give their siblings a better future, the orphaned Kasuga family's elder brother Koichi and elder sister Hitomi sent their three younger siblings to the past where they can guide it to a more peaceful Alternate Timeline.
Advertisement:

In the year 2018 where aliens are still unknown, Ken Kurenai is a boxer who participates in underground matches until a scrawny man who turned out to be a Killer Robot has nearly beaten him to death. Ken was saved by the Kasuga siblings from his historical death, found his missing older brother Kenichiro, and learned of the Bad Future in one eventful night. Their two families (one with a Powered Armor, the other a Humongous Mecha) have to pool their talents and work together to ensure that history wouldn't repeat itself.

To some Tokusatsu fans, those names should be familiar. BraveStorm is a 2017 Japanese Crossover film of Super Robot Red Baron and Silver Kamen but remade with the sheen of The New '10s.