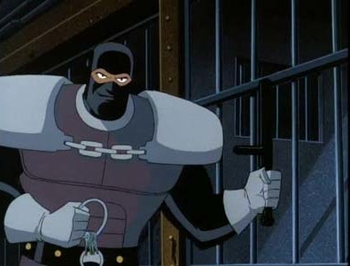 "Put your trust in the Lord. Your ass belongs to me. Welcome to Shawshank."
— Warden Norton, The Shawshank Redemption
Advertisement:

The typical Hellhole Prison has many horrors, but none so great as the prison's warden. He will often be a heartless, soulless monster dedicated to abusing and bullying prisoners in the most brutal ways possible. Alternatively, they will torment prisoners emotionally by saying hurtful words and putting them down. Assuming they don't do both. Bonus points if their actions are illegal themselves, and if they make some of the prisoners act as enforcers. Double bonus points if they get busted and become an inmate in the prison they once ruled with an iron fist.

Note that this doesn't necessarily have to be a prison warden; it could just be the commander of a prison-like institution. Compare Corrupt Politician, Screw the Rules, I Make Them! Contrast Reasonable Authority Figure and The Jailer.