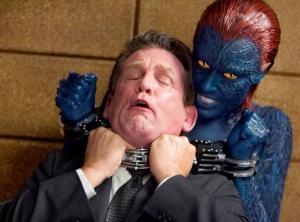 "[Vimes] had several pounds of metal on his wrists or, to put it another way, his arms were a hammer."
— Night Watch
Advertisement:

A cousin to Cardboard Prison. This happens where an antagonist is caught by police/soldiers/the good guys but is destined to escape. The antagonist will then have handcuffs applied but, to facilitate their later escape, will inexplicably be handcuffed so their hands are in front of them. Obviously, their hands are much more useful when they manage to grab a gun or simply run for it.

Often, the handcuffs will be pressed into service as an Improvised Weapon, usually either a club (with rigid cuffs) or a garotte (with chained cuffs) — never mind that this would probably hurt the attacker more than the victim, any bruising can be quickly massaged away.

In real life, most police departments in the United States require suspects to have their hands cuffed behind them, with the palms facing away from each other and the keyhole facing away from the hands, to make this kind of thing less likely. The only exceptions are when it is physically impossible to do so, or when the cuffs are attached to a waist chain (normally during transport) that prevents the cuffs being raised above waist height. In the United Kingdom, handcuffing to the front is common. Sometimes, a particularly nimble character will be handcuffed behind their back and contort themselves between their arms to bring the cuffs in front of them.

Note that there are some restraints that do allow a prisoner to have their hands in front, or at least at their hips, facilitating them being able to sit a chair for long periods and such. In these cases, it's more than just cuffs, but manacles that attach to the prisoner's beltline, restricting how far they can move their hands, and are in a controlled environment, such as a courtroom.

People escaping while bound is covered by With My Hands Tied, which is connected to this.

Contrast Bound and Gagged, when the cuffs are not going off so easily. Can lead to Cuffs Off, Rub Wrists.