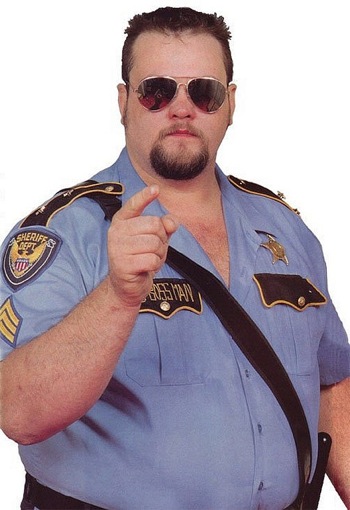 THE LAW AND ORDER OF THE WORLD WRESTLING FEDERATION!!!
Click here to see him during the Attitude Era 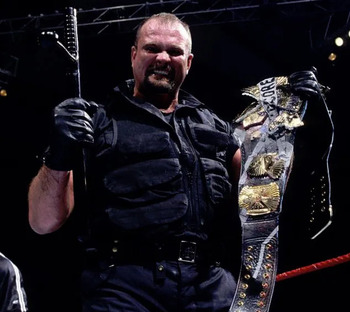 With the Hardcore Championship
"Ray Traylor was destined, it seems, to be Ray Traylor. He was a god-fearing, tax-paying citizen of the world — he was unremarkable, and that was his indelible appeal."
— Deadspin

Raymond Washington "Ray" Traylor Jr. (May 2, 1963 – September 22, 2004) was an American Professional Wrestler most famous to longtime wrestling fans as the Big Boss Man, although he is also known by various other pseudonyms like Big Bubba Rogers, Big Bubba, The Boss, The Boss Man and the Guardian Angel.

He debuted in WCW going by Raymond Traylor, and soon after became the monster Heel Big Bubba Rogers, feuding with Dusty Rhodes. However, his run only lasted a couple years before he made the jump to the WWFnote He left WCW over a disputed payoff on a scaffold match, specifically the fact that manager Jim Cornette was paid $10,000 and he was only paid $5,000, even though he climbed up on the scaffold just like everyone else. Cornette himself even agreed that this was bullshit and went to management and told them to make it right, but to no avail. Traylor wasn't on any sort of contract and immediately jumped ship, and based a new character off his original job as a prison guard in Cobb County, Georgia, and adopted Slick as his manager.

As the Big Boss Man, his WWF run is his most famous, where he continued his reign of terror as a monster heel, and he even formed a tag team with a fellow super heavyweight, Akeem (formerly The One Man Gang) called the Twin Towers. After being a top heel for a couple years, challenging the likes of Hulk Hogan and Randy Savage, the Big Boss Man turned on his manager on an episode of Superstars and had a very successful run as a Face, while displaying some of the best in-ring work of his career.

After a few years, Traylor returned to WCW and underwent a series of name changes, as listed above, due to the WWF's legal team claiming his gimmick was too similar to the Big Boss Man gimmick. He finally settled on Big Bubba once again, meanwhile having rivalries with the likes of Sting and Vader, and even feuding with the nWo. Traylor did return to the WWF for some time in the late 1990s, but this time, for the more mature Attitude Era, he modified his Big Boss Man character into more of a bodyguard-like personality complete with a S.W.A.T. team-inspired outfit, and served with Vince McMahon's Corporation during this run. During this time, he also had a title feud with Big Show, and another feud with Al Snow, both of which fans would rather forget.

Traylor left the WWE in 2002 and worked the independent circuit before passing away of a heart attack in September of 2004, at the age of 41.

He was a former UWF World Heavyweight Champion

In 2016 The Big Boss Man was inducted posthumously into the WWE Hall of Fame by his former manager, Slick.

THESE TROPES'LL BE SERVIN' HARD TIME!!!