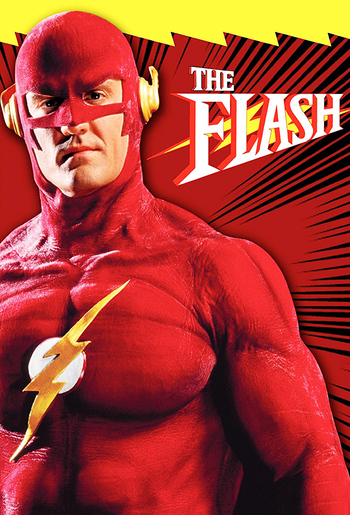 The Flash was a 1990 live-action TV series based on the comic book character of the same name, starring John Wesley Shipp in the title role.

Central City police scientist Barry Allen is caught in a freak lab accident involving a bolt of lightning and several random chemicals on a shelf; the bizarre combination alters his body chemistry, allowing him to move at incredible Super Speed. Shortly afterwards, his older brother Jay is murdered by notorious gang leader (and ex-cop) Nicholas Pike, prompting Barry to seek the aid of STAR Labs scientist Dr. Tina McGee in order to bring Pike and his gang to justice. To that end, Barry dons an experimental high-pressure diving suit, modified with lightning-bolt designs, and sets out on a one-man war on Pike, and eventually on crime in Central City as a whole.

The series lasted for one season, 22 episodes in all, and was eventually canceled due to poor scheduling by CBS (the Gulf War was also a factor). It was produced by Pet Fly Productions in association with Warner Bros. Television.

A second TV series based on the Flash started in 2014 and contains several homages to this show, like Shipp returning as Barry Allen's father, while Amanda Pays, Mark Hamill, and Alex Désert have occasionally reprised their roles as Tina McGee, the villainous Trickster and Julio Mendez respectively. It was eventually confirmed that this series takes place in an Alternate Universe to the newer one's own (the "Arrowverse") after its Barry travels through dimensions. In 2018, John Wesley Shipp's Barry would come back for the yearly Arrowverse crossover event, Elseworlds. This show's setting is now officially designated as Earth-90 within The Multiverse of the Arrowverse, after the year it was created, and received a Fully Absorbed Finale as part of Crisis on Infinite Earths (2019).

Tropes present in this television series based on The Flash: