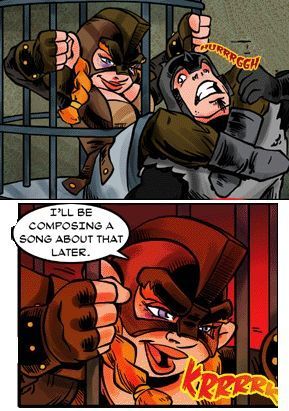 Probably not the sort of thing you'd want for your in memoriam.
Sayid: I'm not going to hurt you, Hurley.
Hurley: Yeah, I saw you snap that guy's neck with that break dancing thing you do with your legs. I think I'll hang back here.
— Lost
Advertisement:

The premise is simple. The character takes hold of their victim between their thighs and either squeezes or twists, sometimes both. The result is either a speedy and painful death by Neck Snap or Head Crushing, or unconsciousness from strangulation. This move is often seen in combination with With My Hands Tied thanks to not requiring arms. It's usually used by female characters. One of the more impressive styles is using a handstand or handspring to get into position.

This method of attack is more commonly used by women than men in fiction, probably because of the sexualization of girls' thighs, and because women are generally considered more likely to have strong legs than arms.

Less risqué could be called "Murderous Calves" or "Murderous Ankles". Same general idea but lower on the legs. Men are rarely seen using this, partly because of their obvious vulnerability when attempting it. However, due the increased popularity of Mixed Martial Arts and awareness of the effectiveness of moves like the triangle choke or the figure four headscissors, it's slightly more common and generally used to demonstrate either Combat Pragmatism, legitimate fighting training, or both.

The Professional Wrestling moves the frankensteiner and hurricanrana can overlap with this trope, but are more “throw” than “crush”, and may also be done with the lower legs.