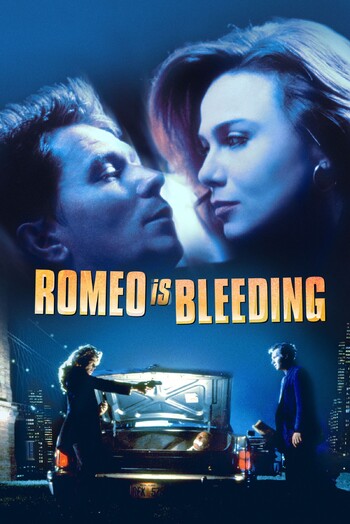 Romeo Is Bleeding is a 1993 ultraviolent neo-noir crime film starring Gary Oldman and directed by Peter Medak. The title is based on the song "Romeo Is Bleeding" from the Tom Waits album Blue Valentine (1978).

Jack Grimaldi (Gary Oldman) lives two lives. By day he is a respected detective with a loving wife Natalie (Annabella Sciorra). By night he works jobs for the Mafia and shacks up with his younger mistress Sheri (Juliette Lewis). Everything changes when he's ordered by the mob to kill a brutal and seductive Russian hitwoman, Mona Demarkov (Lena Olin), who is placed in his custody. Grimaldi can't bring himself to murder Demarkov, as she is such a Femme Fatale that she manages to seduce and make a fool of him. When his mafia boss (Roy Scheider) hears that Grimaldi failed to carry out his order, he decides to get his revenge on him. Now Grimaldi has two problems: he has to prevent himself, his wife and his mistress from being rubbed out by his colleagues and he should kill Demarkov for humiliating him, bringing his life in danger and also because this might prevent his own murder... Trouble is: he is sexually attracted to her and she is professionally superior to him in every other way.

At the time of its release the film was a critical and box office failure, both in the USA as well as worldwide. However, the campy plot has made it something of a cult favorite, especially to fans of Gary Oldman.

Romeo is Bleeding contains examples of: