Film / Room at the Top 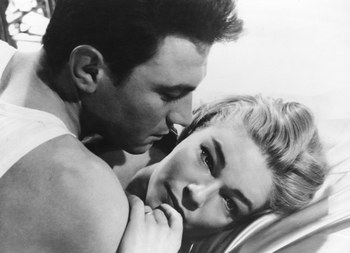 Room at the Top is a 1959 film directed by Jack Clayton.

Joe Lampton (Laurence Harvey) is a young working-class man on the make. A war veteran who spent three years as a POW, he has left his grim sad-sack Yorkshire hometown of Dufton, and arrived in the slightly less grim Yorkshire town of Warnley, where he has gotten a job as an accountant in local government. The intensely ambitious Joe wants more out of life, however. When he notices lovely young Susan Brown, daughter of the local factory owner, he seems equally charmed by her beauty, her upper-class refinement, and the fact that she and her family are very rich.

To get into Susan's good graces, Joe joins the local amateur theatrical group that Susan is a part of. There he meets Alice Aisgill (Simone Signoret), a French expat stuck in a very unhappy marriage to a local businessman. Joe, while putting the full-court press on Susan in his effort to get into high society, finds himself increasingly drawn to the sensual Alice.

English-language debut of Simone Signoret, who had been a star in France since the early 1940s.