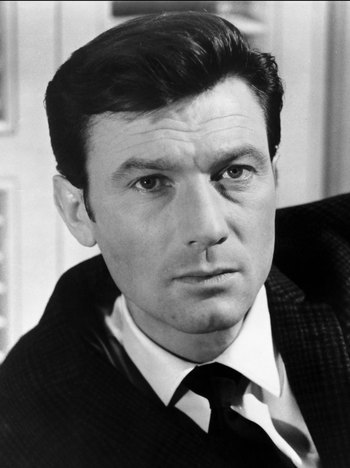 "Someone once asked me, 'Why is it so many people hate you?' and I said, 'Do they? How super! I'm really quite pleased about it.'"
Advertisement:

Laurence Harvey (born Zvi Mosheh Skikne; 1 October 1928 – 25 November 1973) was a Lithuanian-born British actor and film director, known for his clipped, posh accent and cool, debonair screen persona. He was born to Lithuanian Jewish parents and emigrated to South Africa at an early age, before later settling in the United Kingdom after World War II.

Harvey appeared in stage, film, and television productions primarily in the United Kingdom and the United States. He went to the Royal Academy of Dramatic Art but left after three months, and began to perform on stage and film.

A breakthrough to international stardom came after his performance in Room at the Top, for which he received a BAFTA Award.

His spouses were Margaret Leighton, Joan Perry, and Paulene Stone, who he had a child with, Domino, whose career as a bounty hunter made her the subject of the 2005 film of the same name, which is a loose dramatization of her life (emphasis on "loose").

Works he has appeared in with pages on TV Tropes: