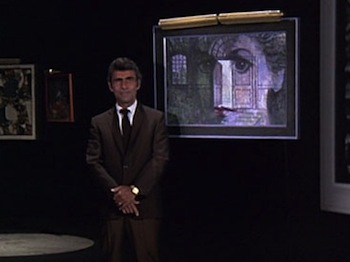 "Welcome, ladies and gentlemen, to the Night Gallery."
Advertisement:

An (initially) hour-long Horror and Speculative Fiction anthology series, hosted by Rod Serling, which ran on NBC for three seasons (1970–73). Each episode includes multiple segments tied together by the Framing Device of a gallery of paintings inspired by the featured stories. The stories include both originals (many written by Serling) and adaptations of works from the likes of Richard Matheson, Fritz Leiber, Basil Copper, and H. P. Lovecraft. (The segments "Cool Air" and "Pickman's Model" are the first, and still the most famous, Lovecraft adaptations made for television.)

Unusually for the formatnote and, oddly, bearing a certain resemblance to Sketch Comedy, the individual segments are not of a set length. They range from one-minute vignettes to long stories that take up most of the episode's run time (and everything in between); the number of segments per episode therefore varies accordingly.

Although the show was subject to Executive Meddling from the beginning (much to Rod Serling's displeasure; unlike with The Twilight Zone, he didn't have creative control) the third season saw the most of this (and possibly a bit of Screwed by the Network), with the episode length reduced to a half hour and the timeslot moved from Wednesday to Sunday. It was cancelled midway through the season.

In syndication, the run was stretched by adding repackaged stories from the short-lived Paranormal Investigation show The Sixth Sense and by splitting the first two seasons' episodes into half hours. The latter change led to heavy re-editing, with longer stories cut down and shorter ones padded to fit the new length.