Museum of the Strange and Unusual 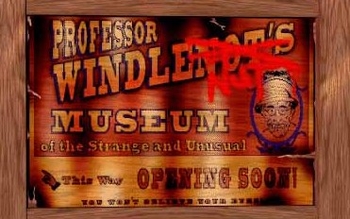 Please refrain from defacing the sign in the future.
"Everything you see in here is either haunted, cursed, or has been used in some kind of ritualistic practice."
— Ed Warren, The Conjuring
Advertisement:

Welcome to Professor Tropington's Museum of the Strange and Unusual. Within these halls, you will find exhibits dedicated to the mysteries of the world. For example, you will find the UFO displays up the stairs, next to the planetarium. To see the cryptid exhibits, take the hall to your left. To visit the Psychic Powers exhibit, well, you should know where that is. And yes, we prize the eclectic range of our collection over any benefits that might be gained from consistent themes.

May I point out at this moment that the laboratories are strictly off-limits to unauthorized personnel. In addition, emergency exits are in place should anything happen. We also guarantee that none of the exhibits will come to life, drive you insane, or open a portal to another dimension. After you leave, you may want to visit the Bazaar of the Bizarre, the Artifact Collection Agency (or the one-man Collector of the Strange), or the Superhero Trophy Shelf. Now, feel free to peruse our fine museum, but beware... You never know what may happen.

If you were looking for the Museum of Boredom, you'll find them just across the commons. Ours has much better exhibits, though, if I may say so myself...

Sub-trope to a World of Mysteries.

In this exhibit you may find: