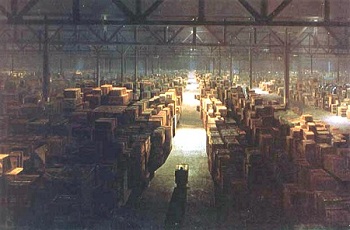 Ark of the Covenant? Two aisles down on the left, right between the Roswell ship and Jimmy Hoffa.
"If a radio landed in the hands of Thomas Jefferson, do you know what Jefferson would do? He would just lock it up, until he figured out it wasn't going to kill him. That's exactly what we do here. We take the unexplained... and we safely tuck it away."
— Artie Nielsen, on Warehouse 13
Advertisement:

A Secret Government Warehouse is where a nation keeps various items whose existence should be kept secret from the general populace. Usually run by an Artifact Collection Agency.

In fiction, the Secret Government Warehouse is a plot device used for conveniently disposing of story elements that have fulfilled their purpose in a story, but that would cause consistency or continuity problems for subsequent (or previous) stories in the same fictional setting were they to remain. In many cases, the story items disposed of are of such a nature that they would make it difficult to set up the necessary tensions and conflicts for other stories in the fictional setting, as they would make such tensions and conflicts simple to resolve. A secondary purpose of the Secret Government Warehouse plot device is to satirize the ineptitude of governments, the premise being that if a government found itself in possession of an extraordinary object or person, it would simply catalog it and lose it in a vast filing system.

Occasionally, a Secret Government Warehouse can serve as the main setting for a story. In this case, the warehouse has a rather different purpose in the story (even though its in-universe purpose is the same), that of providing a unique setting with a steady influx of phlebotinum and other weirdness.

Some conspiracy theorists believe that Secret Government Warehouses exist in Real Life, containing suppressed inventions, archaeological and historical evidence that contradicts mainstream theory, and objects that have famously been lost.

A sub-trope of Black Site and Extranormal Institute. Not to be confused with Abandoned Warehouse, even though the two can overlap.