Video Game / Legacy Of The Ancients 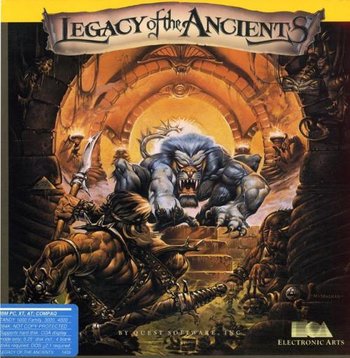 In this 1989 MS-DOS game, you are a simple shepherd on the planet of Tarmalon. In your time, you have never ventured further than the town of Holy Point, two days march to the north.

Yet, one day, while tending your flock, you see a dead man by the side of the road. Though you have never considered yourself a thief, something compels you to reach down and take the leather scroll clutched in his stiffening fingers. Unclasping his arm-band is trickier, but you manage to unclasp it and fasten it to your own wrist. Scooping up two coins of carved jade and a disk of obsidian, you resume your travels.

Suddenly, in the distance, you see a building of the finest white marble. You have traveled this route may times before - why did you never see it before? Forgetting your flock, you head toward it. A shimmering archway beckons...

Congratulations, you've found an an ancient museum, put together for the amusement of spacefaring travelers. Unfortunately, that scroll you're carrying is the Wizard's Compendium, a book of world-destroying spells. That dead guy was the museum's best agent, killed before he could report the danger. Now, it's on you to level up and save the world.