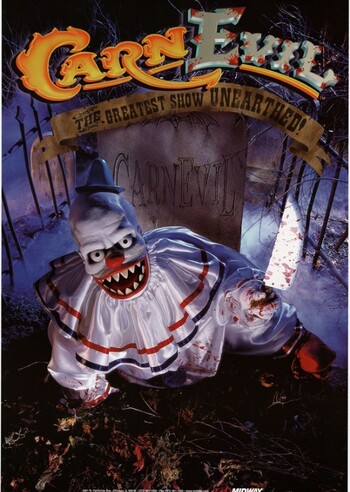 The Greatest Show Unearthed!
"When the Moon is full and trees are bare -
Walk though the Cemetery if you dare.
Where skeletons rot and corpses fester -
Locate the tomb with the skull of a Jester.
Feed him the token all shiny and new -
It is then that CarnEvil will return for YOU!"
— The opening narration
Advertisement:

A horror-themed Light Gun Game from Midway Games, CarnEvil is about... well, an evil carnival, set in the fictional town of Greely Valley, Iowa. The game starts off with a hayride/ghost tour making its way through a cemetery at night. One of the patrons hops off the ride and locates the grave of Professor Ludwig Von Tökkentäkker, which seems normal enough... save for the evil-looking statue of a jester's skull on it and a token sticking out of a slot on the tombstone.

Curious to see if the legend (mentioned above) has any weight to it, our faceless protagonist takes the token and puts it in the jester's mouth, whereupon it promptly comes alive and nearly bites his hand off before ascending into the night sky with a maniacal cackle. In a matter of terrifying seconds, a haunted carnival indeed appears—erupting out of the ground with shocking speed, trapping the protagonist (and, presumably, the rest of the tour) inside. And this isn't a good place to be trapped in the middle of the night—there's all number of nasty, bizarre terrors stalking the carnival grounds in search of new victims. Worse yet, the carnival also revived Ludwig Von Tökkentäkker, and he's certain to have some plans in store for anyone who survives the creeps.

Luckily, the protagonist stumbles across the shooting gallery—which, in keeping with the macabre nature of this particular carnival, happens to have real shotguns. Grabbing one of them, with his hapless friend Betty tagging along, he prepares to blast his way out...or die trying.

Released on Halloween 1998, CarnEvil is considered one of Midway's best arcade games note though still unreleased on a home console, giving House of the Dead some competition (both games came out the same year). But what people remember the most about the game is its rather surreal and dark humor, as well as its highly disturbing premise. Definitely not one for the kiddies.