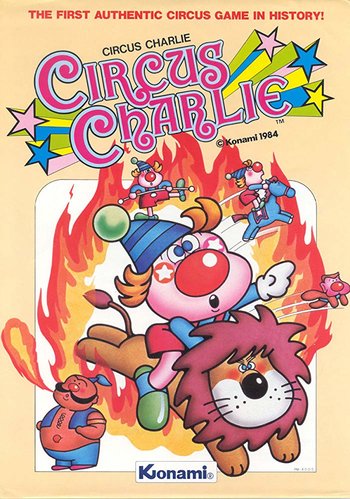 Circus Charlie (サーカスチャーリー Sākasu Chārī) is an action arcade game published by Konami in 1984. The player controls a clown named Charlie in (depending on the versions) five or six different circus-themed minigames.

In the game there are six regular stages (five in certain home ports) you can choose to play in your prefered order (plus an extra stage that is unlocked if various minigames are played) of differing tasks that are to be completed by Charlie. Grabbing money bags, performing dangerous tricks, avoiding enemies, completing stages, etc., earns Charlie points. After the sixth stage is completed, the game starts over again but with a faster pace and more difficult (but exactly the same in terms of task to be completed) levels.

The game was ported to many home consoles and computers of its day, including MSX and Famicom.

Tropes that can be found in Circus Charlie: