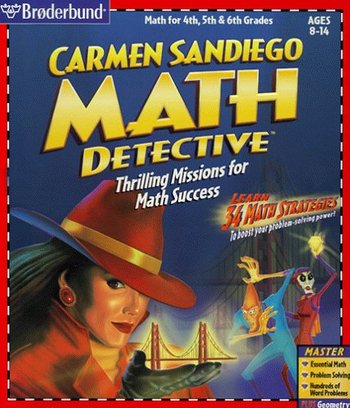 So THAT'S how she steals monuments...
Carmen Sandiego Math Detective was released in 1998, a year after Carmen Sandiego: Word Detective. In this game, Carmen Sandiego has stolen twelve of the world's largest wonders/monuments and shrunken them down into pocket-sized gems with her new invention, the Quantum Crystalizer. With the help of Chase Devineaux, you must travel to VILE hideouts all over the world to retrieve the wonders and return them to their rightful size and location.
Advertisement:

This game plays a great deal like Word Detective, almost to the point of being a Mission-Pack Sequel. Instead of English, grammar, and spelling, the puzzles you must solve are math equations. Many of the tropes from Word Detective apply here.

This game displays the following tropes