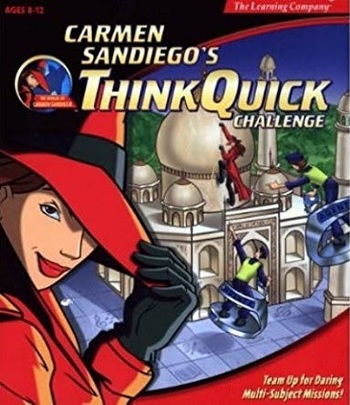 Released in 1999, Carmen Sandiego's ThinkQuick Challenge is the first Carmen Sandiego game produced by The Learning Company, which took over the franchise after Brøderbund Software became defunct in 1998.
Advertisement:

The premise of the game is that Carmen and her Rogues Gallery of six Master Thieves have created a fleet of KnowBots to steal various types of knowledge from the world. You, plus other players if you opt for multiplayer mode, fly around the world, defeating KnowBots by answering their questions. Once you've defeated enough KnowBots, you have the codes necessary to get into the lair of today's crook. But to finally enter the lair, you have to solve one of two logic puzzles. Whoever has the most "capture energy" left by this point gets to capture the thief.

ThinkQuick Challenge can be seen as a vague follow-up to Carmen Sandiego: Word Detective and Carmen Sandiego: Math Detective. Although the format and gameplay are completely different, it features many of the same characters, most notably Chase Devineaux, and has a similar storyline about Carmen using some new technology to up her game.

This game displays the following tropes