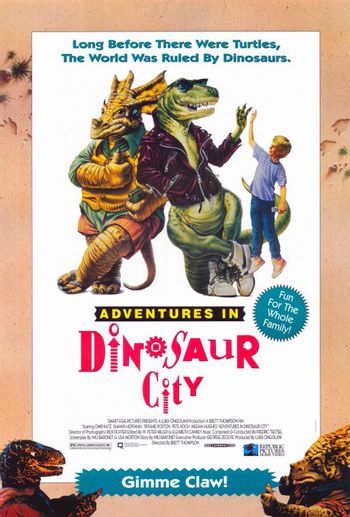 Adventures in Dinosaur City is a 1991 film that features Live Action and a small amount of Animation.

It involves a trio of teenagers, Timmy, Jamie and Mick, who enjoy watching their favorite TV show (the titular "Adventures in Dinosaur City") which features anthropomorphic dinosaurs. Wanting to watch it on a better screen, Timmy, the youngest of the three, suggests that they try watching it on his parents screen in his laboratory.

The moment they turn it on however, a vortex sucks the three into the TV screen, and into their favorite television show. Upon entering the new world, the trio comes across a flightless Dimorphodon named Forry as well as an anthro Tyrannosaurus and a Protoceratops named Rex and Tops, respectively. The two dinos are freedom fighters battling against the dictator, Mr. Big, and his caveman henchmen, "The Rockies".

Compare to Theodore Rex for oddness and similar special effects.