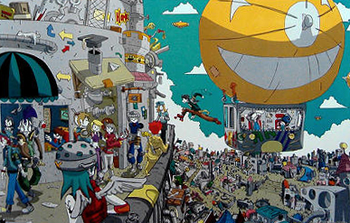 , the City of Opportunities
"Follow me to a place
where incredible feats
are routine every hour or so.
Where enchantment runs rampant,
just wild through the streets.
Open sesame, here we go!"
— Theme to Aladdin: The Series, about Agrabah.
Advertisement:

No need for Adventure Towns; all the excitement, glamour, outlandishness, and romance you could ever hope for just happens to be right in your own city. Unlike Tokyo and New York, this city is usually fictional.

The place to go to get easy Hero Insurance, judging by the massive collateral damage they can sustain.

There may be a Magnetic Plot Device hidden somewhere around here. Try to find one. Alternatively, the reason for extraordinary happenings is the Big Bad trying to Take Over the City.

See also Geographic Flexibility, New Neighbours as the Plot Demands, Superhero Capital of the World and Aliens in Cardiff. Contrast Nothing Exciting Ever Happens Here. Best served with a heaping of Land of One City or Hub City. May sometimes be accompanied by Where the Hell Is Springfield?.

The City is bound to be this.