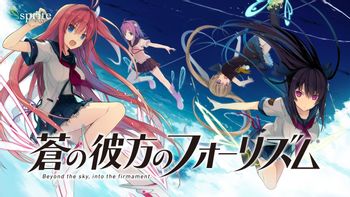 a.k.a. Ao no Kanata no Four Rhythm

The visual novel was developed and published by Sprite, the same company that brought you Love, Election & Chocolate, was released in November 2014 and the Gonzo-produced anime began airing as a part of the Winter 2016 Anime season.

An Android (and later PC version) mobile game called Ao no Kanata no Four Rhythm -ETERNAL SKY- was released in 2016. The visual novel was also released for the Nintendo Switch in 2020.