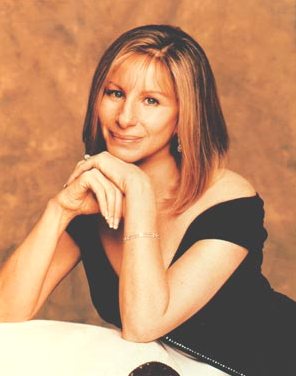 "I've been called many names like perfectionist, difficult and obsessive. I think it takes obsession, takes searching for the details for any artist to be good."
Advertisement:

She has had an astonishing thirty-three albums hit the Top Ten, ten of which went Number One, and is the only singer in history to have a Number One album in six consecutive decades, beginning with People in 1964 and, as of now, ending with Encore! in 2016. She defined the adult contemporary music genre during the 1960s and '70s and much of the '80s as well. She has won two Oscars, ten Grammys, four Emmys, an honorary Tony,note Which makes her one of the few people to have pulled off an "EGOT" — winning an Emmy, a Grammy, an Oscar and a Tony — though the honorary status of her Tony means that her position in that club is debatable. and a Peabody. She was also the first woman to win a Golden Globe for Best Director, was a Kennedy Center Honors honoree and won AFI's Lifetime Achievement Award in 2001.

Streisand made her film debut as Fanny Brice in Funny Girl, a role she originated on Broadway, and for which she split a Best Actress Oscar with Katharine Hepburn (The Lion in Winter). She would later give noted performances in Hello, Dolly!, On a Clear Day You Can See Forever, The Way We Were (opposite Robert Redford), the 1976 remake of A Star Is Born and Yentl (which she also produced and directed).

Oh, yes, she's a director as well. Other directing credits include The Mirror Has Two Faces and The Prince of Tides.

Has taken heat for the shape of her nose over the years such as from New York Times critic John Simon, who has been waging war on the singer's nose since the 1970s. To her credit, Ms. Streisand refused to undergo cosmetic surgery early in her career, though admittedly not out of a high moral principle; she once famously credited her unique voice to a deviated septum. "If I ever had my nose fixed, it would ruin my career." Barbra's nose was referenced on Glee, where Kurt uses it to talk Rachel (who is a fan of Streisand) out of getting a nose job.

She is also a noted political activist, and was very close friends with former President Bill Clinton (whom she introduced at his first inauguration) and his mother Virginia Dwyer, whom she called at least once a week from when they met to Dwyer's death. She is a famous supporter of liberal causes large and small and is noted for her strong stances on feminism and gay marriage, among other issues.

Although the population as a whole either loves her or despises her, she is a pop culture icon and one of the most important celebrities in the past fifty years of American history.

Her music is often referenced in media as being favored by gay men — expect any man listening to or asking for a song by her to have their sexuality questioned.

Streisand is married to James Brolin.

Trope Namer for the Streisand Effect, after her failed attempt to censor a picture of her house (this one to be precise

◊). The picture was taken during a geological survey of the California coastline, and was a completely unremarkable entry in a database with thousands of similar pictures. Streisand's legal battle made it remarkable, and the picture is now plastered all over the Internet with her name next to it.