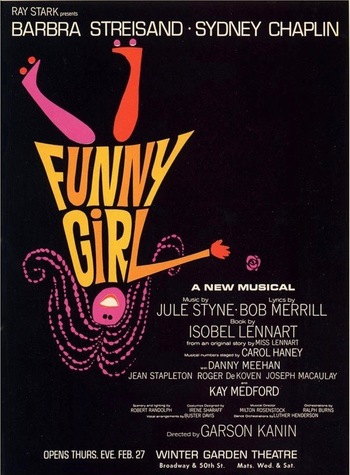 "Don't tell me not to live, just sit and putter
Life's candy and the sun's a ball of butter
Don't bring around a cloud to rain on my parade."
— "Don't Rain on My Parade"
Advertisement:

This 1964 musical, based on the life of Ziegfeld Follies star Fanny Brice, was the breakthrough role for Barbra Streisand. In 1968, William Wyler helmed the film version, also starring Streisand, who tied with Katharine Hepburn for the Academy Award for Best Actress.

Set in New York City at the turn of the 20th century, Funny Girl chronicles Brice's life from her humble beginnings to meeting her future first husband (real-life second husband), poker player Nick Arnstein (Omar Sharif). She becomes famous in the Follies, but leaves to marry him. He eventually runs himself into financial ruin, and is busted for his part in a bonds scam.

A sequel to the film version, Funny Lady, was released in 1975. While the first was met with critical acclaim, Funny Lady, with Streisand and Sharif reprising their roles and James Caan as Brice's third husband Billy Rose, was widely panned, becoming one of the lowest rated movie musicals in history.