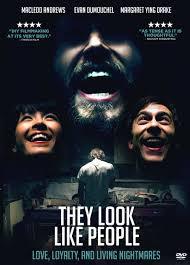 They Look Like People is a 2015 indie horror film by first-time filmmaker Perry Blackshear. The story focuses on a troubled man who suspects that humanity is slowly being replaced by body-snatching monsters. He reconnects with an old childhood friend to recruit allies while at the same time seriously doubting his sanity.