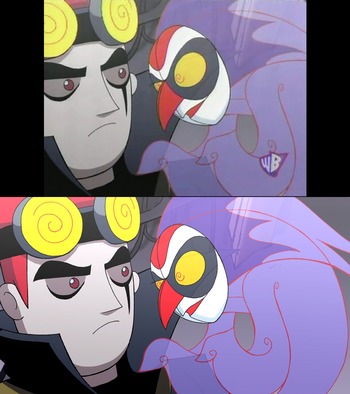 Taken in the literal (and original) definition, "remastering" is a process where the original video or audio (analog) source material is edited to (in theory) look newer, brighter, cleaner, etc. and put on the new commercial release, likely of the digital kind in the post-'90s world. It initially started with music in the move to Compact Disc Digital Audio, abbreviated CDDA (the CDDA standard is known as the Red Book standard), before expanding to use with film reissues come the introduction of DVD, which allowed for much better picture quality than prior videotape formats. The practice especially picked up with the advent of Blu-ray and HD video streaming, and nowadays is most commonly associated with new releases of old films and TV shows.

Literal definition aside, though, Remastering is associated with the process of making an old product look more "better", or at least like it's in mint condition. The usual process of a remastering includes such things as;

This term tends to get used pretty fast and loose with Video Games— although their digital nature means that they usually aren't "remastered" in the traditional sensenote Unless it's remastering a game with Full Motion Video, examples being Night Trap: 25th Anniversary Edition and Command & Conquer Remastered Collection, the term is generally used to refer to a game being ported or updated to newer hardware, often with enhancements and tweaks being made to take full advantage of the hardware and bringing previously outdated aspects of the game design up to modern standards. These generally fall under Updated Re-release, though the line between that, a straight-up port, and a Video Game Remake can often blur together.

The quality of a remastered product tends to vary a lot. Generally, though, people appreciate remasters the best when they're able to increase the visual and audio quality of their product/make them enjoyable to watch on their new Hi-Def monitors with as little modifications to the source material or their memories of the product as possible. Digital Destruction and Loudness War are when the Remaster actually makes the product worse than before (with the latter being specific to music); unfortunately, the common consumer is typically unaware of this happening.

One of the advantages of remastering a project shot on film is that unlike electronic video (analog and digital alike), images shot on film have no fixed resolution, being captured as tiny crystals on a filmstrip. Thus, the quality of the transfer depends largely on the quality of the digital scan and not the film negative itself. With a good scan, a competently-made film from fifty years ago can look like it was made a week ago. A disadvantage of moving to digital cinematography is that projects are recorded with a finite number of pixels from which no new resolution can be created, which is why digital cinematography didn't take off until the image quality was more comparable to film in theatrical projection.

Remastered products tend to be sold as a Limited Special Collector's Ultimate Edition or an Anniversary Edition. Compare the George Lucas Altered Version. Contrast The Not-Remix, in which the material is improved in quality but also altered from the original version.

has some more general information. Also look up Master Recording

for information on what Masters are when referring to this - so as not to confuse it with all the other kinds of masters there are or are not.