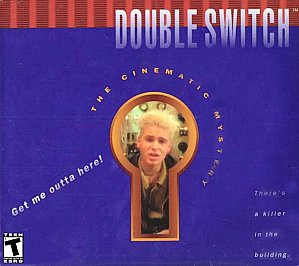 Eddie: Hey... Hi. My name is Eddie. I need your help. This is my building, and since the neighborhood really sucks, I built all these traps and security systems, to protect the people who live here. The problem is, some bonehead locked me in the basement, and cut off my controls. But, see, they forgot about the phone lines, which is how I got you in. Now you can protect the tenants, and get me outta here. You and me are friends, right? You gotta help me...
Advertisement:

An adventure Interactive Movie Full Motion Video game produced by Digital Pictures and released for Sega CD, Sega Saturn and PC. It was re-released for iOS and Android in 2016 by Flash Film Works. Screaming Villains, alongside Flash Film Works, and Limited Run Games released a 25th Anniversary Edition of the game on December 13th, 2018, for Steam and PlayStation 4, and for Nintendo Switch on October 5, 2019. The game has a similar format to their earlier game, Night Trap.

You play as an anonymous Internet user whose device suddenly gains access to the security system of the Edward Arms, a old Egyptian-themed American hotel. A young man named Eddie introduces himself as the creator of the system, as well as the architect of an extensive array of booby traps designed to capture intruders. However, Eddie has been locked in the basement and cut off from the controls, so it falls to you to take over the Edward Arms' cameras and traps, and protect the tenants from a stream of invaders searching the hotel for something.

The gameplay improves from Night Trap in a few ways: there is a mini-map displaying where the guests and intruders are, removing the need to constantly switch between cameras; the trap timing and visual/audio cues are more lenient; and some enemies can use the traps against you, meaning that you have to disarm as well as arm traps.