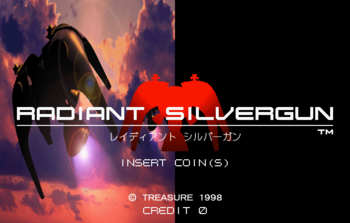 "Now that it's done....
I've begun to see the reason why we are here."
Advertisement:

Radiant Silvergun is a vertical scrolling shooter by Treasure, released exclusively in Japan for the arcades (on the Sega Titan-Video hardware) and on the Sega Saturn in 1998. It was ported to Xbox Live Arcade internationally on September 14, 2011.

The gameplay is rather unique, allowing various combinations of three buttons to fire any of seven weapons at any time, as well as a charged attack. Weapons gain in strength as you score points with them, and destroying a chain of enemies that have the same color gives higher and higher bonuses as the chain continues. Thus, you'll need to use a variety of attack methods to level up evenly, as well as NOT destroying enemies of other colors so as to not break the chain. Failure to do so results in a near Unwinnable scenario against the Final Boss, as underleveled weapons are ineffective and rendered useless. The game is designed so that there is almost always a 'right' weapon for any situation. Like previous Treasure games, Radiant Silvergun concentrates heavily on boss battles. The bosses in the game are designed so that they have multiple 'sections' which, if all destroyed before the 'core' of the boss, will award the players with point bonuses. Being able to apply the right weapons on any different boss is key to obtaining these bonuses. The infamous boss warning screen appears about two dozen times and bosses take numerous different forms to try to annihilate the player.

The story is rather bleak and depressing: In July 14 of 2570, a strange crystalline structure called the Stone-Like is found in an ancient ruined city, and then proceeds to kill everyone on Earth. The player takes control of a pilot in a small crew that escaped the Stone-Like's blast, helming the eponymous Silvergun and returns to the planet to discover the secrets behind the artifact. Things are just getting worse from this point on.

See also Ikaruga, the Spiritual Successor to Radiant Silvergun. Not to be confused with Radiant Historia or Radiata Stories.

Encountered an assailant: Example List. Be attitude for gains...