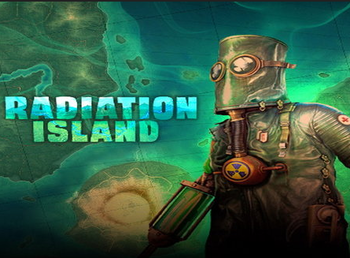 Radiation Island is a Wide-Open Sandbox Survival Horror game, created by developer Atypical games, and originally released for iOS devices in 2015. It was then ported to PC in 2016, and to Nintendo Switch in 2018.
Advertisement:

Your adventure begins aboard a battleship in World War II, somewhere in The Devil's Sea, an area commonly believed to make ships disappear. Suddenly an island flickers into view, klaxons sound as you rush to your station, the flickering increases...and then you find yourself washed up on a beach, naked and with no possessions, as your battleship flickers out of view. Now it's up to you to learn what you can about this Island of Mystery, and stay alive while doing so. You'll need to make or scavenge everything you'll need.