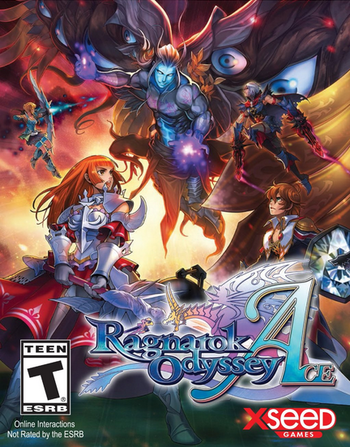 An Action RPG for the PlayStation Vita developed by Game Arts and published by XSEED Games for localization in North America and Europe in late 2012.
Advertisement:

The gameplay is simliar to Capcom's Monster Hunter series in that it revolves around teams of up to four slaying gigantic monsters and using the loot found to create new weapons and outfits, but the overall theme is set within the world of Ragnarok Online and placed in a more action-based drive than the MMORPG it is based on.

Taking place in a mercenary hold, the player joins the forces that must defend mankind from the threat of monsters taking over. As a fellow mercenary, you can either fight alone against the many enemies that you’d encounter through the Story Quests, or take them head on with three other players online. While there are only six available classes, the player will be allowed to freely switch between classes to determine a favorable fighting style for any situation. Weapons—both looted and crafted by the local Blacksmith—can be enhanced by the later to raise the damaging stats. And, true to RO-Style, Odyssey includes a Card System that may allow the player to effectively tackle any task—though, most cards will often have downsides—by installing them into their outfit of choice. In addition, players can tap into Dainslef Mode to get an edge in battle.

An Updated Re-release, entitled Ragnarok Odyssey ACE, was released on the Playstation Vita and Playstation 3 in 2014. Added features include new dungeons, such as the town of Niflheim and the randomly generated Tower of Yggdrasil, a bonus chapter after the story mode, gameplay balances, and customizable Halomonas Weapons.