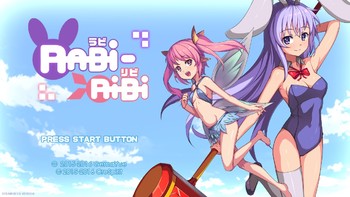 Erina is just a normal, everyday rabbit. She loves her owner Rumi and her life on the peaceful Rabi Rabi Island. But one day, she wakes up in a strange place. What's more, besides her bunny ears and tail, she's become human! Now, with a help of her trusty Piko Hammer and a cheerful fairy named Ribbon, Erina must learn the cause of her transformation, while evading the bunny-obsessed members of the UPRPRC!

Rabi-Ribi is a Metroidvania game developed by CreSpirit and published by SekaiProject. Featuring adorable pixel art and an Improbably Female Cast, the game has you explore colorful levels and lets you fight enemies either up close and personal with Erina's Piko Hammer or at a distance using Ribbon's magic. The bosses, meanwhile, throw frantic Bullet Hell patterns at you and can often be brutally challenging.

Over the course of its history, the game has gained a number of DLC and supplementary material:

The game was released for PC on January 28, 2016 and is available on Steam, and was ported to to PlayStation 4 and PS Vita to follow in October of 2017. A Nintendo Switch port including most of the DLCnote The Halloween Update and the Is The Order a DLC? update are included, with plans to add the Before Next Adventure DLC was released on October 17, 2019.

Rabi-Ribi has also made a crossover apperance in the Rhythm Game Dynamix, with several tracks from the former appearing in the latter.note It should be noted that 3R2, one of the composers on the soundtrack team, also makes tracks for a number of music games.