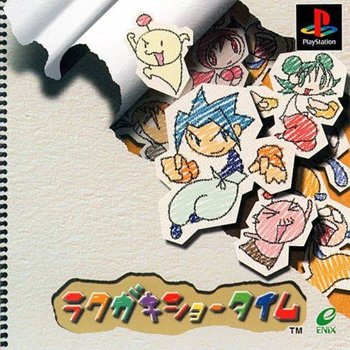 Rakugaki Showtime is a Japan-only wacky Fighting Game by Treasure, released for the PlayStation in 1999. It tells the story of a few doodles drawn to life by the God Hand (not those ones) for the purpose of defeating a group of evil doodles... also drawn to life by the God Hand, who is merely staging this epic battle for its own amusement. (Sounds vaguely like Super Smash Bros.'s Master Hand, doesn't it?)

The gameplay can be described as Power Stone meets Super Dodge Ball - the two-dimensional fighters move around on a 3D plane and can attack each other at will, but will spend most of their time picking up whatever they can and throwing it at their enemies. Gameplay is fast and frantic, the visuals are amusing, and the story is simple enough to be understood with little knowledge of Japanese.