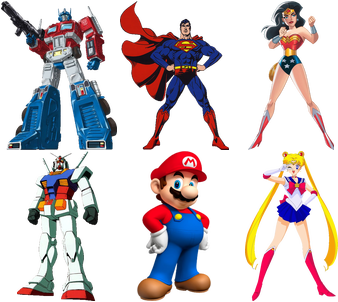 We know that Red Is Heroic and Blue Is Heroic. There's almost no better way to say your character is a hero than giving them a costume that is primarily red, blue and sometimes yellow for good measure.

If you see a character wearing both red and blue prominently, chances are they are The Hero, the main character, or at least playing for the good guys' side. With blue typically symbolizing heroic resolve and caring, while the red stands for righteous passion and strength, it is a good visual shorthand to the audience that this is a person you can trust.

Red and blue are both strong colors that balance well and are commonly paired together. Usually blue below the belt and red above whether wearing armor, dresses, superhero tights, or as simple as blue jeans and a red t-shirt. Yellow is the go to for a third color (with white being a fourth option), likely related to Gold-Colored Superiority and Gold and White Are Divine (with yellow standing in for gold in animation). The other typical set up is that most of costume will be blue, an iconic piece of it (such as a hat or a cape) will be red, and yellow will be used for accents, trims, buttons, logos, and other accessories.

Sometimes a heroic institution may make a point of giving its members red, blue and yellow uniforms. If it's just a small group, however, you may be looking for Chromatic Arrangement or Color-Coded Characters.

This trope may have stemmed from the early days of comic books in which heroic characters typically had color schemes that sported Primary Colors (Red, blue, yellow, like Superman) while villains typically had secondary colors (Purple, green, orange, gray — think The Joker, Green Goblin or Lex Luthor's iconic Powered Armor).

A Sub-Trope of Good Colors, Evil Colors, Red Is Heroic and Blue Is Heroic. Contrast Red and Black and Evil All Over and Grayscale of Evil. The inverse of this trope is a Secondary Color Nemesis.