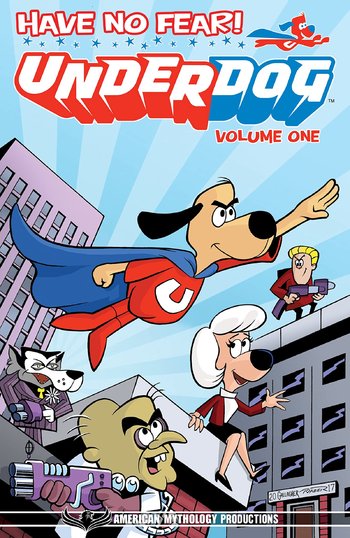 One of Total Television's most famous Animated Series, Underdog was a canine parody of Superman which debuted on NBC in 1964 and moved to CBS in 1966. Usually, each half-hour episode consisted of two chapters of a four-part Underdog story, separated by an unrelated TTV short.

Underdog's alter ego was "humble, lovable Shoeshine Boy". When summoned by TV reporter Sweet Polly Purebrednote "Oh where, oh where has my Underdog gone? Oh where, oh where can he be?", Shoeshine Boy dashed into the nearest phone booth and emerged in his heroic costume. For some unexplained reason, Underdog always spoke in rhyme. His foes included the mad scientist Dr. Simon Bar Sinister and his henchman, Cad Lackey (voice caricatures of Lionel Barrymore and Humphrey Bogart), and the lupine crime boss Riff Raff (based on George Raft).

A live-action film that just happened to be called Underdog was released by Walt Disney Pictures in 2007.

, made 35 years after the balloon's debut.

You might've heard the theme song thanks to being Sampled Up by Wu-Tang Clan on their "Wu-Tang Clan Ain't Nuthing ta F' Wit", which was created as part of a bunch of 90s acts redoing old cartoon themes. Parts of the Underdog theme song could also be heard in Wheels!, an Apple Macintosh game aimed at disabled children.

(For the Japanese manga of the same name, click here)

There's no need to fear, Tv Tropes is here!: