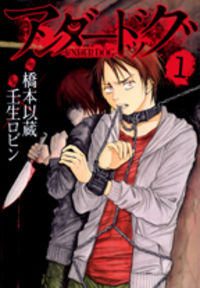 Naoto Kuniyoshi is a bored, misanthropic youth who feels he was born in the wrong era, believing that he has more in common with the samurai and ninja of Japan's past than those living in the decadence of the present day. Having been nick-named "Ghost Boy" for his ability to go through life almost completely unnoticed by those around him, the twenty year-old student spends his days setting up spying equipment to stealthily take pictures of young women around his college campus, which he later photoshops into pornographic images for his "collection."

Everything changes when Naoto is recruited by an enigmatic coordinator to participate in a special "tournament" with promises that he will lead the life of a billionaire should he win. The catch: to progress through each of tournament's 8 rounds, Naoto must find a way to kill his opponent using only indirect means, with all of Japan designated as their arena. After unwittingly agreeing to join the tournament, Naoto is immediately thrust into a world of murder, torture, and espionage that he never dreamed could exist in the modern day.

Underdog is a horror manga by artist Mibu Robin. It started its run in 2008 in Monthly Young Jump magazine, though it prematurely ended a year later in August 2009.

Not to be confused with the less graphic cartoon series of the same name.

Underdog includes examples of the following: