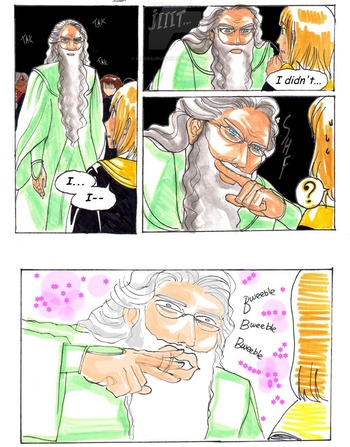 "Okay, clearly you are the textbook definition of that noise you make when you strum your finger up and down over your lips..."
— Spider-Man, Ultimate Spider-Man Issue #60
Advertisement:

While insanity is not always something to laugh at, the kind of madness that leads to someone batting at one's own lips is usually the kind that is Played for Laughs. Characters batting at their own lips is used as a punch-line, requiring a set-up (characters being taken-aback by something irrational or surreal) for them to work off of (motorboating themselves the only kind of reaction they can give, responding to strangeness with more strangeness).

See also Aside Glance or Cuckoo Finger Twirl, other reactions to utter nonsense. Not to be confused with motorboating of an illicit nature.

open/close all folders
Comic Strips
Fan Works
Live-Action TV
Advertisement:
Music
Web Video
Western Animation
Let's be honest for a moment. The first time you ever saw this trope in action was probably in this category.
Real Life
Feedback

SpongeBob discovers the identity of the boat thief.

SpongeBob discovers the identity of the boat thief.