Western Animation / A Ham in a Role 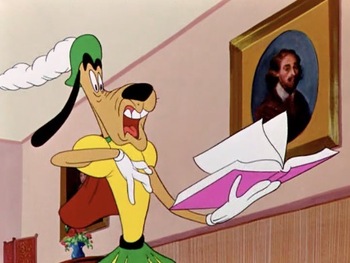 He really is a ham.
Advertisement:

A Ham in a Role is a 1949 Looney Tunes cartoon short, directed by Robert McKimson (though it was initially planned by Art Davis before his animation unit was disbanded due to budget issues) and starring Mac and Tosh, the "Goofy Gophers".

An unnamed dog is on the Warner Bros. lot, filming yet another silly Looney Tunes cartoon. After taking one too many pies to the face he quits in disgust, resolving to go home and study Shakespeare so he can be a serious actor. He comes home to find the Goofy Gophers have gnawed through most of his book of Shakespeare and turned it into a bed. After the dog throws them out the window, the gophers vow revenge. The dog starts rehearsing lines from Shakespeare, but the gophers continually interfere with his rehearsal by making the lines come to life through ironic sight gags and literal visual puns.