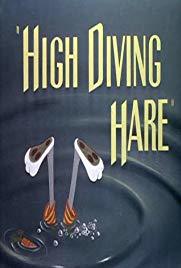 "High Diving Hare" is a 1949 Looney Tunes animated short directed by Friz Freleng. In this cartoon, Yosemite Sam is eager to see Fearless Freep's high-diving act on a vaudeville stage. But when the diver can't make it, he forces emcee Bugs Bunny to dive instead. Hilarity Ensues.

"Forgot to fill the tropes with water":