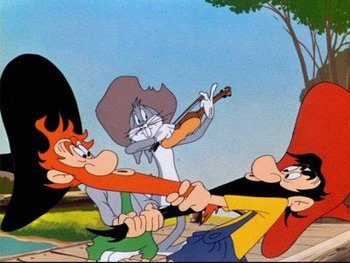 "Step right up, you're doin' fine / I'll pull your beard, you pull mine..."
"Oh, Murgatroyd!"
Advertisement:

"Hillbilly Hare" is a 1950 Merrie Melodies cartoon starring Bugs Bunny. Bugs is vacationing in the Ozarks when he runs into two stereotypical hillbillies, Curt and Punkinhead Martin, who get the idea that Bugs is one of the Coys, the family they're feuding with. After embarrassing and outwitting the hillbillies in typical Bugs Bunny fashion, Bugs tricks them into a long, elaborate square dance routine in which he gives them increasingly violent directions, until the brothers finally dance off a cliff.

Directed by Robert McKimson, "Hillbilly Hare" is actually his highest-rated classic Looney Tunes or Merrie Melodies cartoon on IMDb, with an average rating of 7.9/10.