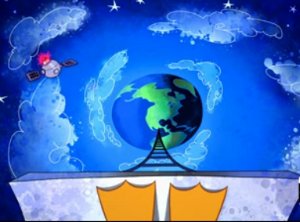 When they call it the high dive, they're not kidding!
Advertisement:

After a long, hard day, nothing's more refreshing than a dip in some nice cool water.

A character wants to show off how brilliant and athletic they are without getting all sweaty and gross or joining a team? Platform diving is the best way to do it. Climb that ladder to the diving board or platform, throw the shoulders back, and let gravity do most of the work.

In the situations where this trope shows up, it is never as simple as that. Swimming pools and diving boards are not necessarily hazardous themselves, unless tampered with, or Artistic License has been invoked — then diving into the pool goes from a simple activity most people can do with ease to something a lot more difficult and dangerous.

The trope is common in several different visual media, both live-action and animated.

When the trope is played seriously, particularly in live-action, the technical prowess will be focused on (entering the water without a splash, doing the trick dive correctly) and the Jerkass will seek to ruin it for the diver.

The dive may result in:

When Played for Laughs in a live-action setting, the diver will often flub the dive and end up belly-flopping instead (which is actually a rather painful way to hit the water in real life due to surface tension).

When the media is animated, the high dive is almost always Played for Laughs, and the sky is the limit. Almost literally.

The dive itself, when taken from the low earth orbit high dive may result in the swan dive, the jackknife, the triple somersault, the half-gainer, etc., all done for the viewer's benefit as the diver is falling several thousand miles to the pool below. Occasionally, the diver may catch fire from re-entry into Earth's atmosphere, only to be extinguished by entering the water. If the diver is the protagonist, no matter how high the dive, they will find the pool filled with Soft Water. If the diver is the Butt-Monkey, all bets are off for how the dive ends.

Oh, and the pool below? It may be a flat surface painted to look like a pool full of water. It may be filled with water. Or jello. Or not filled at all. It may be replaced by a glass of water. Or a damp sponge. Or the pool may be populated with sharks or crocodiles, leaving the diver to attempt to land safely with all that momentum, and without getting eaten or toon damaged. Often results in the diver ending up bellyflopping into the water.

Cricket wants to jump off the high dive at the pool to impress the kids, but finds himself too scared to jump.

Cricket wants to jump off the high dive at the pool to impress the kids, but finds himself too scared to jump.