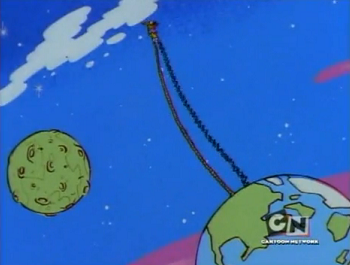 "Ed! Get down from the exosphere or I'm telling mom!"
Advertisement:

A character, rising to some challenge, ascends to such incredible heights that the sky goes black, stars shine brightly, satellites in orbit hover just overhead, and the planet itself can now be seen floating in space below him.

Countries may even be labeled on the planet surface, as on a globe.

Despite the fact they've clearly left the atmosphere, Explosive Decompression is rarely invoked on a character in this situation. In fact, they can probably still breathe without problems. For cases when they ascended by building an impossibly-tall tower, see Star Scraper. For less over-the-top ascents, see Journey to the Sky.