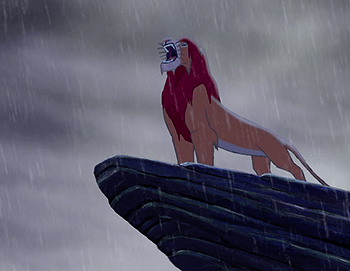 A creature, character, hero, villain...stands at the edge of a cliff and lets loose a roar to the heavens, either in a cry of victory, grief, a display of power, or some other strong emotion.

The one climbing up on a high place to roar at the heavens is almost Always Male. Often there's an implied element of Smite Me, O Mighty Smiter. Rarely to never do we see a female, even the Mama Bear or Action Girl climbing up anywhere to roar at anything.

Oddly enough, the Big Bad never seems to be available or around to take this opportunity to turn it into a Literal Cliffhanger, either.

See also Climbing the Cliffs of Insanity, Dramatic High Perching, Skyward Scream. May happen early in the film, or right after the Climbing Climax. Can overlap with Howl of Sorrow.