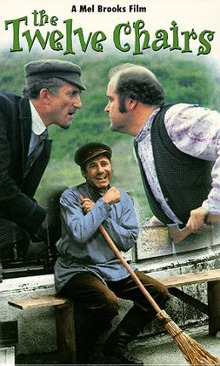 The first part of a satirical duology by Ilia Ilf and Eugeny Petrov.

In post-civil war Soviet Russia, a former member of nobility, Ippolit Matveyevich Vorobyaninov, works as a desk clerk, until his mother-in-law reveals on her deathbed that her family jewelry had been hidden from the Bolsheviks in one of the twelve chairs from the family's dining room set. Those chairs, along with all other personal property, had been expropriated by the government during the Civil War. He becomes a treasure hunter, and after the smooth operator and Con Man Ostap Bender forces Kisa ("Kitty", Vorobyaninov's funny childhood nickname, which Bender prefers to long "Ippolit") to partner with him, they set off to track down the chairs. This ultimately helps Kisa, who doesn't possess Bender's charm and is not as street-smart.

The two "comrades" nearly get the prize at the auction, but because Kisa screwed up and squandered all their cash, the chairs are split up and sold individually. They are not alone in this quest, either: Father Fyodor Vostrikov took advantage of the deathbed confession, and has also set off to recover the fortune. In this search for Mme Petukhova's treasure, he becomes Vorobyaninov's main rival. While in this enterprise Ostap is in his element, Vorobyaninov is not so happy. He's steadily abandoning his principles and losing self-esteem.

The Odd Couple travels across the USSR in search of the MacGuffin, going through a number of Adventure Towns, giving the author a chance to satirize a wide section of the USSR populace.

One of the best and most enduring Russian literature works from the Soviet era, and an inexhaustible source of great quotes along with its sequel, The Little Golden Calf.

Mel Brooks directed a well-liked adaptation in 1970, with a wonderfully hammy Ron Moody as Vorobyaninov, with Dom De Luise as Father Fyodor, Frank Langella as Ostap Bender, and Brooks himself as Tikon.

Two other Russian adaptations have created a bit of a Broken Base amongst the Russian viewers. The main point of contention is whether Andrei Mironov's

interpretation of Bender as less of a Lovable Rogue and more of a Villain Protagonist works.

The book was also loosely adapted into Keep Your Seats, Please!, a 1936 comedy from Ealing Studios.

This book and film feature examples of: