Literature / The Unwomanly Face Of War 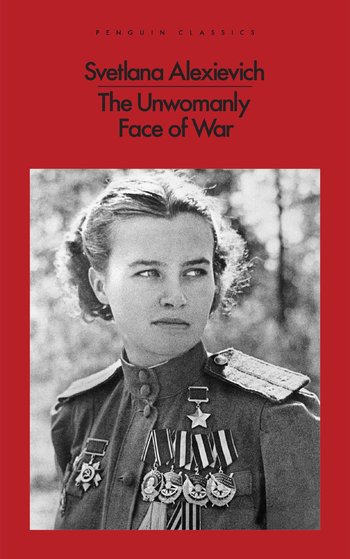 The Unwomanly Face of War: An Oral History of Women in World War II is a collection of first person accounts of women enlisted in the Red Army (or among the partisans) during World War II, written by Belarusian journalist Svetlana Alexievich in her usual style. It was first published in Russian in 1985, when the Glanost note  Russian for openness, a relaxed control of press allowed her to publish a book which did not portray the Great Patriotic War as War Is Glorious.

The accounts were collected from hundreds of women who served in the Red Army in various positions: medical personnel, but also as pilots, snipers, machine gunners, tank crew members and partisans, as well as in auxiliary roles. They are presented as "monologues" of different lengths with occasional notes from the author. The witnesses are listed with their names and role in the army, while many others stayed anonymous.

The narrative wants to subvert the usual trope that depicts the epicity of war times and collected personal stories from am intimate point of view, which the Soviet censorship would not allow as it was too unpatriotic. The book does not shy away from the ugliest details, so expects lots of Nightmare Fuel and Tear Jerker.

The unwomanly face of these tropes: