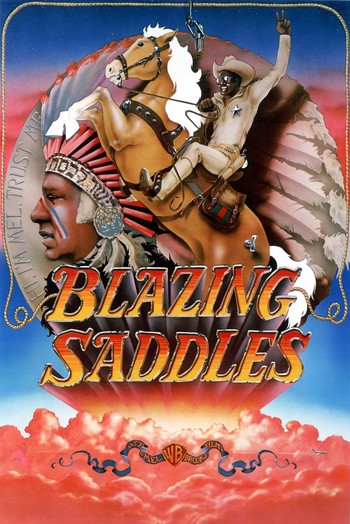 "He rode a blazing saddle,
He wore a shining star,
His job, to offer battle
To bad men near and far!
He conquered fear, and he conquered hate,
He turned dark night into day
He made his blazing saddle
A torch to light the way!"
— Theme Song

Blazing Saddles is a 1974 American comedy film directed and co-written by Mel Brooks (with writing help from none other than Richard Pryor), which mercilessly spoofs The Western.

In 1874, railroad construction in the southwestern United States runs into quicksand and the path needs re-routing, which means that the land where the tiny town of Rock Ridge sits will soon become extremely valuable. Territorial Attorney General Hedley (not Hedy) Lamarr (Harvey Korman) schemes to get his hands on the now-priceless real estate by hiring thugs to kill the sheriff and terrify the locals into leaving so he can acquire it for a pittance. When they don't leave, Lamarr convinces bumbling Governor William J. LePetomane (Brooks) to appoint a black man named Bart (Cleavon Little) – awaiting a death sentence for striking a white man – as the new sheriff, a move calculated to result in Bart getting killed by the racist townspeople and/or the townspeople leaving in disgust (which would give Lamarr free rein over the land). Once Bart arrives in Rock Ridge, Hilarity Ensues. Adding to said hiliarity are alcoholic Jewish gunslinger The Waco Kid (Gene Wilder), sexy German chanteuse Lili Von Shtupp (Madeline Kahn), and hulking monosyllabic horse-puncher Mongo (Alex Karras), among others.

Completely, offensively, and unapologetically politically incorrect, Blazing Saddles also skewers nearly every Western trope listed on this site (and likely a few we haven't thought of yet). Instead of making a serious movie saying "racism is bad", Brooks decided to make a movie where all the racists are idiots, a philosophy he also employed when dealing with Nazis in his movies. Placing sixth on the AFI's "100 Years... 100 Laughs" and selected for the National Film Registry in 2006, this is definitely not a movie to skip if you enjoy laughing.

An animated "re-imagining" of the film (dubbed Paws of Fury: The Legend of Hank, formerly known as Blazing Samurai), with Brooks onboard as an executive producer and the voice of a character, has been in Development Hell since 2015. It's currently slated for a July 2022 release.

Excuse me while I whip these tropes out!

Charlie: [as the cart starts to sink] Am I wrong, or is the world… [voice rises a few octaves] rising?That's Hedley!
Feedback