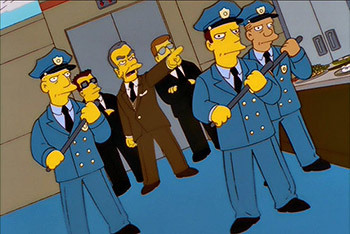 The Baroness has stumbled across The Hero in an alley. The Evil Prince has discovered The Five-Man Band infiltrated his Decadent Court. The Evil Chancellor has crashed the revolutionaries meeting.

The Good Guys are outnumbered. The Big Bad is there with an army of Mooks. They do the only logical thing. They run!

Alternatively, the Evil Chancellor and his retinue just fell for the heroes' plan and the King tells in no uncertain terms that he heard their Engineered Public Confession.

This phrase is usually preceded or followed by some of these other Stock Phrases:

I hate that cliche!

Alternative Title(s): Seize Her, Seize Him

I hate that cliche!