Film / The Adventures of Captain Proton 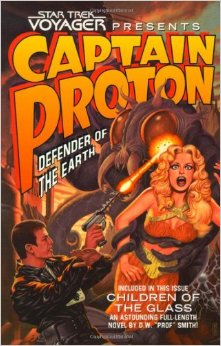 A Show Within a Show from Star Trek: Voyager that appears in the episodes "Night", "Thirty Days", "Bride of Chaotica!" and "Shattered".

Captain Proton is an Affectionate Parody of 1930s-50s Universal and Republic Film Serials heroes like Flash Gordon and Commando Cody. The holodeck program was created by Tom Paris (who always plays the hero, Captain Proton) ostensibly for the purposes of historical study, but more likely so he and Harry Kim can have a fun time battling hammy villains and rescuing gorgeous space babes.

This film serial provides examples of: