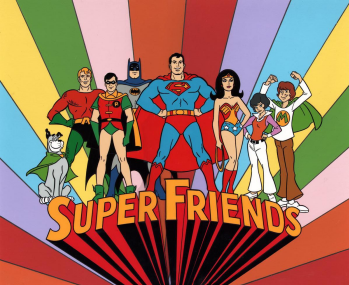 The show that determined more of what you (used to) know (or think) about superheroes than even the Adam West Batman series.

Super Friendsnote alternate spellings can include Superfriends (one word) and SuperFriends (two words in CamelCase), the way it was displayed on-screen varied is a long-running Hanna-Barbera series, which ran on ABC from 1973 to 1986 (with breaks), featuring superheroes from DC Comics. The core heroes were Superman, Wonder Woman, Aquaman, Batman and Robin. Originally, they were joined by "Junior Super Friends" Wendy, Marvin and Wonder Dog. The series' first season, in 1973-4, consisted of hour long stories, most of which concerned current issues such as energy conservation; the "criminal" was usually a Well-Intentioned Extremist with benign motives, who is usually easily persuaded to a more reasonable stand at the end.

Subsequent seasons could conceivably be considered separate series, not unlike Super Sentai a.k.a. Power Rangers:

And that was that, until Justice League came along. Many thanks to Will's Super Friends Episode Guide

and Challenge of the Super Friends

This show was very campy in its day, Challenge included (although the last season began to veer away from this atmosphere), and used many of the worst Animation Tropes. Despite many of the superheroes' portrayals as rather bland, the show also had the unfortunate effect of tainting the reputations of Aquaman and Hawkman among the general public (see This Looks Like a Job for Aquaman). Although Aquaman, especially recently, has been more of a King Arthur figure than a traditional brawler, the main problem was the show's general Media Watchdog-induced abhorrence of violence and actual fighting. While Superman could fly, lift heavy things and melt metal things, Batman had his cool gadgets, and Wonder Woman had her invisible jet and Lasso of Truth, Aquaman could basically breathe under water and talk to animals, and Hawkman could fly... and nothing else.

There was also a tie-in Super Friends Comic-Book Adaptation for a while. It wasn't half-bad, once it started departing from the strict guidelines of the television show. It's best remembered now for the Canon Immigrant "Global Guardians" team that it created as a team of Captain Ethnic heroes.

Recently, there's a new "Super Friends" toy line and associated comic book, this one featuring Superman, Batman, Flash, Wonder Woman, Aquaman and the John Stewart Green Lantern. While the current comic uses an extremely cartoony art-style, it has been praised for its imaginative plots and affection for the more bizarre corners of DCU mythos.

In 2010, Warner Bros. Animation made DC Super Friends, a 17-minute short for Fisher-Price as a tie-in for their range of DC Super Friends toys, packing it as a DVD bonus with select products.

The Arrowverse has made quite a few nods to the show, with an old STAR Labs facility (which looks just like the Hall of Justice) being used as the staging ground for the heroes during the Invasion! crossover event, the Legion of Doom showing up in season 2 of Legends of Tomorrow, the team formed by Supergirl and her friends in the eponymous series often are referred to as the "Superfriends", and most recently, said STAR Labs facility being used again at the end of Crisis on Infinite Earths (2019) as Barry gathers the heroes for the Justice League (in all but name), and Gleek has apparently escaped and is running around the building.

for a snarky and sarcastic take on the series.

"Meanwhile, at the Hall of Doom..."
Feedback