Anime / Pokémon Ranger and the Temple of the Sea 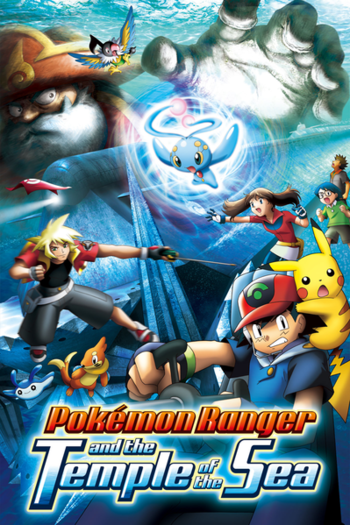 The seas 'cross over' with the Ranger of Pokémon.
Advertisement:

Pokémon Ranger and the Temple of the Sea, or known in Japan as Pocket Monsters Advanced Generation the Movie: The Pokémon Ranger and Prince of the Sea: Manaphy, is the 9th Pokémon film to be released, and is the last film for Pokémon the Series: Ruby and Sapphire of the series. It was also the first and only Pokémon film to be based on a spin-off, until Detective Pikachu came out. It was also the first movie to be dubbed by The Pokémon Company International.

A Pokémon egg is obtained by a pirate known as Phantom. Working undercover is Jack "Jackie" Walker, a Pokémon Ranger who retrieves the egg and flees. Meanwhile, Ash, May, Brock and Max meet up with Lizabeth, one of the descendants of the "People of the Water." Later, they team up with Jackie as they attempt to keep the egg safe from Phantom and his crew, and a Manaphy hatches from the egg. The little Pokémon sees May as its mother.

With a feature running for 1 hour and 45 minutes, it is currently the longest Pokémon: The Series movie made-to-date.

May catches the Manaphy Egg

May catches the Manaphy Egg