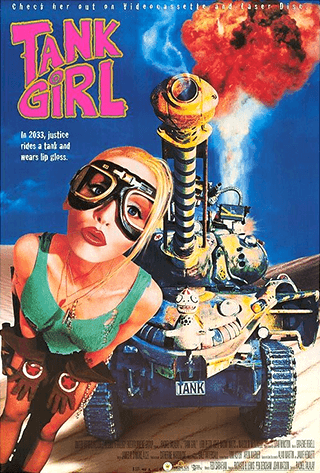 "Listen up, cause I'm only telling you this once. I'm not bedtime story lady, so pay attention. It's 2033. The world is screwed now. You see, a while ago this humongous comet came crashing into the earth. Bam, total devastation. End of the world as we know it. No celebrities, no cable TV, no water. It hasn't rained in 11 years. Now 20 people gotta squeeze inside the same bathtub - so it ain't all bad."
— Tank Girl
Advertisement:

In an apocalyptical future, a comet strikes Earth, drying up the world's oceans and making water the most valuable substance in the world, controlled by a single ruthless corporation, Water and Power, which charges exorbitant prices for the necessary resource. Becca and her group of friends live off the grid by controlling the last unowned water source, leading to a raid by Water and Power that ends with Becca forced into corporate slavery, while her child companion Sam is abducted and sent to a brothel. Becca's wise mouth and defiance makes her a target of the Water and Power's CEO Kesslee, who is determined to break her. He almost succeeds, except for the interference of Jet, a meek W&P mechanic who befriends Becca.

Becca makes an escape, taking along with her both Jet and a Water and Power tank that she tricks out to an anti-corporate battle machine. From there, the story becomes a wacky tale of a girl and her semi-sentient tank, as Becca, Jet, and the mutant resistance force known as the Rippers square off against Water and Power to save Sam...and maybe the rest of the world, too.